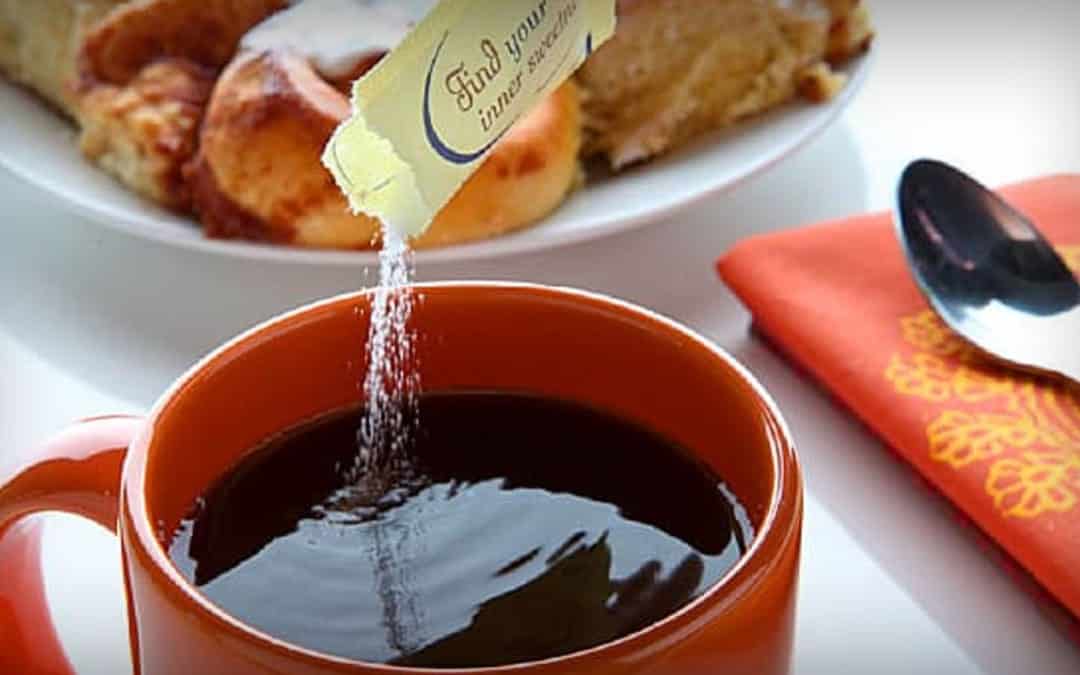 As a long-time consumer of alternative sweeteners, my heart skips a beat when I see headlines accusing alternative sweeteners of everything from making people fatter (the opposite of what most of us are going for), to disrupting our gut biome, causing cancer and causing dementia!  These claims really bum me out!  I have good reasons why I use sweeteners and they play an important role in my personal strategy for weight loss and maintenance, as well as in our professional protocol and food products!

Why do I care?

For one thing, I’m carb-sensitive. I’ve had life-long PCOS and I was born with a genetic predisposition toward type 2 diabetes, Metabolic Syndrome, Metabolic Type B and obesity – all of which share insulin resistance at their core.  As someone with these risk factors, when I eat sugar, it sends my system out of balance, shifts me into fat-storage mode, and causes BIG cravings for MORE.

For another, the majority of our clients at Evolve180 are carb-sensitive, too. And our protocol was designed to help shift away from the triggering effects of carbs to an efficient metabolism that burns fat rather than chronically storing it.  The transition to a better way of eating is made much easier when we include a few artificially sweetened treats here and there.  It helps counter feelings of deprivation and allows a more gradual adoption of protein, healthy fats and non-starchy vegetables as the new staples of our diet.

Natural alternatives like stevia, erythritol and monk fruit, and lab-created ones like sucralose have been a God send for people like us.  Without those alternatives, we’re caught in a no-man’s land of all or nothing.  So I care very much about whether the scary headlines shouting that artificial sweeteners are killing us are true.

I’m a realistic person.  In general I don’t believe hype.  I don’t think stevia is God’s gift to pre-diabetic dieters. But I also don’t believe its killing us in droves.  I believe the truth is somewhere in the middle – like most things in life.

That’s why I was really glad to run across this article by John Solokas called “Artificial Sweeteners – A Free Lunch, or an Obesogenic Carcinogen? What 80+ Studies Say.”

I learned in my college statistics class that the double-edged sword of data is that you can make numbers say pretty much anything you want them to if you know how to frame them.  If you are trying to prove a point (in other words you already believe something and want to back the belief up with numbers — a.k.a. bias), you can usually find a way to do that.   On the other hand, if you start a study without a concrete enough theory about what you imagine you’ll find, you can end up with a lot of random information that is clouded by variables that don’t connect well enough to make your data mean much.

Click-bait headlines, designed to alarm people enough to read an article and generate revenue for the author and advertisers definitely fall on the side of starting with bias.  When you want to back up a scary headline with ‘flexible’ sources of validation, you’ll find a wealth of PubMed studies ripe for interpretation in whatever fashion you desire.  What I like about Solokas’ article is that it’s based on a meta-analysis of 80+ studies and it breaks down each accusation by analyzing whether the logic presented is consistently backed up by more than one study, and with more than one viewpoint.

I’ll let you peruse it yourself. It’s well written and informative. But here are my favorite takeaways:

Despite eye-popping headlines, Solokas found “ZERO well controlled, experimental studies that show a causal link between artificial sweeteners and weight gain.”  That’s right!  Not ONE!  All of the studies click-baiters use are correlative, not causative.  That’s like making a claim that rain causes cancer because cancer rates rose during a time when it also happened to be raining more often.

He goes on to say that most studies actually show that using artificial sweeteners is an effective weight loss strategy for many people.And this includes diet soda – which, when substituted in place of sugary drinks had the same positive effect on weight loss as substituting water!

In this case, there was no concrete data either way.  Some studies suggested a decrease in appetite, hunger and cravings when using non-caloric sweeteners, and others suggested an increase. The key word here is suggested. None of these studies were concrete enough to draw scientific conclusions.

Part 2 of Solokas’ article will come out in early June and in that one, he’ll address claims that artificial sweeteners cause diabetes, disrupt gut bacteria, cause cancer.   I’ll post my thoughts about that when it comes out.  But for those of us who are hoping stevia and monk fruit are more innocent than the headlines suggest, here’s his SPOILER ALERT:  “I don’t think you have much to worry about, enjoy your diet soda and stevia packets in peace.”

Thanks, John, for your level-headed and scientific review.

Get 1-on-1 Weight Loss Coaching

Our site uses Cookies to help it display properly on your device, enhance your user experience, and gather data for site optimization. By continuing to browse our site (by scrolling or clicking), you agree to the use of these cookies. You can adjust your preferences in Cookie Settings.

This website uses cookies so that we can provide you with the best user experience possible. Cookie information is stored in your browser and performs functions such as recognising you when you return to our website and helping our team to understand which sections of the website you find most interesting and useful.

Strictly Necessary Cookie should be enabled at all times so that we can save your preferences for cookie settings.

If you disable this cookie, we will not be able to save your preferences. This means that every time you visit this website you will need to enable or disable cookies again.